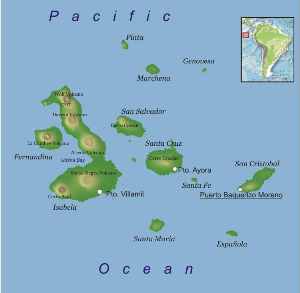 Organisms introduced onto insular ecosystems, after they have become established, frequently increase to destructive numbers. Several species of mammals introduced onto the Galápagos Islands illustrate this ecological axiom. For example, domestic or pariah, and feral. Problems derived from their presence are most apparent on the islands of Santa Cruz and Isabela. Feral and pariah dogs are both scavengers and predators. While other introduced mammals (chiefly feral cattle and pigs) have served as prey, in recent years severe depredations on the unique endemic Galapagan fauna have been caused by the dogs. The chief targets have included land and marine iguanas, tortoises, and colonially nesting marine birds. To counter this problem, a coordinated and an eradication program on Isla Isabela, begun in 1981, continues with marked success. Control rests primarily on carefully placed flesh baits poisoned with Compound 1080 (sodium monofluoroacetate). Field studies on distribution, demography, behavior, and disease transmission also began on Isla Isabela in 1981. Particularly notable is the high incidence of filarial heartworm in several species of mammals, including the local human residents. Dogs are important reservoirs of this parasite. Descriptions of the problems created by the dogs and speculations on the nature of selective return to the wild state are presented.