International differences in practices and attitudes regarding pet cats' interactions with wildlife were assessed by surveying citizens from at least two cities in Australia, New Zealand, the UK, the USA, China and Japan. Predictions tested were: (i) cat owners would agree less than non-cat owners that cats might threaten wildlife, (ii) cat owners value wildlife less than non-cat owners, (iii) cat owners are less accepting of cat legislation/restrictions than non-owners, and (iv) respondents from regions with high endemic biodiversity (Australia, New Zealand, China and the USA state of Hawaii) would be most concerned about pet cats threatening wildlife. Everywhere non-owners were more likely than owners to agree that pet cats killing wildlife were a problem in cities, towns and rural areas.
Agreement amongst non-owners was highest in Australia (95%) and New Zealand (78%) and lowest in the UK (38%). Irrespective of ownership, over 85% of respondents from all countries except China (65%) valued wildlife in cities, towns and rural areas. Non-owners advocated cat legislation more strongly than owners except in Japan. Australian non-owners were the most supportive (88%), followed by Chinese non-owners (80%) and Japanese owners (79.5%). The UK was least supportive (non-owners 43%, owners 25%). Many Australian (62%), New Zealand (51%) and Chinese owners (42%) agreed that pet cats killing wildlife in cities, towns and rural areas was a problem, while Hawaiian owners were similar to the mainland USA (20%).

Thus high endemic biodiversity might contribute to attitudes in some, but not all, countries. Husbandry practices varied internationally, with predation highest where fewer cats were confined. Although the risk of wildlife population declines caused by pet cats justifies precautionary action, campaigns based on wildlife protection are unlikely to succeed outside Australia or New Zealand. Restrictions on roaming protect wildlife and benefit cat welfare, so welfare is a better rationale.
Posted by Jorge at 00:14 No comments: 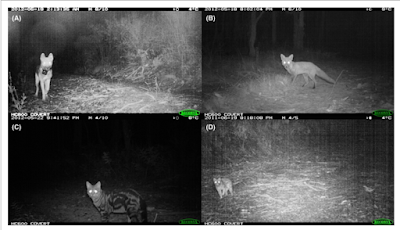 Camera trapping is widely used in ecological studies. It is often considered nonintrusive simply because animals are not captured or handled. However, the emission of light and sound from camera traps can be intrusive. We evaluated the daytime and nighttime behavioral responses of four mammalian predators to camera traps in road-based, passive (no bait) surveys, in order to determine how this might affect ecological investigations. dogs, European red foxes, feral cats, and spotted-tailed quolls all exhibited behaviors indicating they noticed camera traps. Their recognition of camera traps was more likely when animals were approaching the device than if they were walking away from it. Some individuals of each species retreated from camera traps and some moved toward them, with negative behaviors slightly more common during the daytime. There was no consistent response to camera traps within species; both attraction and repulsion were observed. Camera trapping is clearly an intrusive sampling method for some individuals of some species. This may limit the utility of conclusions about animal behavior obtained from camera trapping. Similarly, it is possible that behavioral responses to camera traps could affect detection probabilities, introducing as yet unmeasured biases into camera trapping abundance surveys. These effects demand consideration when utilizing camera traps in ecological research and will ideally prompt further work to quantify associated biases in detection probabilities.
Wild
Posted by Jorge at 00:02 No comments:

Ferreira, G. A., Nakano-Oliveira, E., Andriolo, A., & Genaro, G. The influence of female presence and seasonality on the home range size and activity patterns of male domestic cats in Brazil’s Atlantic Forest. Journal of Ethology, 1-11.
The factors that affect the home range size of domestic cats (Felis silvestris catus) in a semi-domesticated condition (i.e., cats that receive shelter and food from humans but are free to move in the wider natural environment) is not completely understood. Here, using radio telemetry, we present the first assessment of the home range size and activity patterns of male domestic cats living in the insular environment of Brazil’s Atlantic Forest, and examine the extent to which these were influenced by the presence (‘resident males with females’: RMF group) or absence (‘single males’: SM group) of females in the residences of their owners. Daily and seasonal activity patterns have also been characterized. Home ranges of the RMF were markedly smaller than that of the SM and exhibited less overlap with the home ranges of other males than did those of the SM. Male cats were most active at twilight and evening (44.68 ± 1.07) and least active in the afternoon (28.76 ± 2.79). RMF presented nocturnal activity greater than SM, especially in the dry season. Our data indicate that presence of females is an important factor in shaping these parameters of domestic male cats.
Posted by Jorge at 23:53 No comments:

A descriptive study on human-dog intercations in Brazil

Highlights
•We introduce and describe the community dog program of Campo Largo, Brazil
•The relative frequency of dog-initiated interactions towards vehicles was much lower than those directed towards humans
•Community members and strangers interacted similarly and mostly in a positive manner with community dogs
•Only strangers kicked dogs
•Behaviors varied across dogs, particularly regarding chasing and avoiding vehicles

Free-roaming, ownerless dogs comprise a considerable portion of Brazil’s dog population. To address societal concerns for animal welfare, the Brazilian town of Campo Largo established the ‘community dog program’, where free-roaming dogs are cared for by self-appointed community members, known as maintainers. As this program was established only two years ago, little is known about the interactions that take place between these dogs and people residing in these communities. Thus, the objective of this study was to describe the types of human-animal interactions observed between community dogs and humans in Campo Largo. Dog subjects (n=7), selected by the municipality based on accessibility and community approval, were of mixed breeds, and averaged 4.0±4.16 (mean±SD) years old, ranging from 1 to 10 years old. Over an 18-day period, each dog was observed through continuous focal sampling for six consecutive hours on three separate days, with the exception of two dogs, Pitoco and Moranguinha, who were observed for one and two days, respectively. Interactions were presented as medians and total counts, and grouped as dog-initiated or human-initiated. Human-initiated interactions were further distinguished as either stranger-initiated and community member-initiated. Of the 465 total dog-human interactions, 298 were initiated by dogs and 167 by humans. Dogs interacted with vehicles a total of 157 times. Relative frequency of dog-initiated interactions towards vehicles was much lower than those directed at humans. While dogs approached humans a median of 9 times per 6 h observation period they approached vehicles 0 times per observation day. Vehicle-chasing was observed a median of 2 times per 6 h period. Avoiding and barking at humans was observed, directed most often towards strangers who had no known previous contact with the dogs. While humans petted, hugged and kissed dogs, they were also seen to kick, scold and attempt to scare them. Both community members and strangers showed affection towards dogs. Kicking was observed a total of 4 times, only performed by strangers. However, strangers were also observed to feed dogs a median of once per observation period. This descriptive study is the first documentation on the types of interactions between community dogs and humans in Campo Largo.
Posted by Jorge at 12:28 No comments:

Short, J. (2016). Predation by feral cats key to the failure of a long-term reintroduction of the western barred bandicoot (Perameles bougainville). Wildlife Research, 43(1), 38-50.

Context: Reintroduction of endangered species potentially places them back in contact with putative factors of historical decline, inadvertently providing the opportunity to evaluate their impact.

Aims: To monitor the long-term progress of a population of western barred bandicoot reintroduced to mainland Australia and to assess factors involved in its eventual local extinction.

Methods: Bandicoots were reintroduced from offshore Dorre Island to the nearby mainland peninsula of Heirisson Prong in 1995. The narrow neck of the peninsula was fenced to exclude foxes and feral cats from a 1200 ha area, but the area was subject to periodic incursions. There was parallel management of a confined but unsupported population in an in situ 17-ha predator refuge. Bandicoots were assessed for abundance, body condition and reproduction two to four times annually between 1995 and 2010. In addition, perceived threatening processes (drought, disease and the abundance of cats, foxes and rabbits) were monitored.

Key results: Bandicoots became well established at the site, spreading to all available habitat. Numbers fluctuated strongly, peaking at ~250 in 1999 and then declining to apparent local extinction (with subsequent re-establishment from the refuge), and at ~470 animals in 2006, followed again by extinction.

Conclusions: Predation by feral cats was implicated as the primary cause of both free-range extinctions and the eventual elimination of all bandicoots from the predator refuge. Other contributing factors in one or more of the declines were a reduction in reproduction and recruitment in bandicoots during a one-in-100-year drought, the impact of overabundant European rabbits on vegetation used by bandicoots for nesting shelter and brief fox incursions at key times.

Implications: Existing methods of control of feral cats are rendered ineffective in the presence of abundant and diverse native fauna and abundant exotic species (particularly European rabbits). In addition, episodic drought in arid Australia intensifies the impact of predation by restricting reproduction of prey species. These factors hamper the attempts of conservation managers to re-establish vulnerable species at sites other than those with the infrastructure and/or management intensity to largely exclude exotic predators (and preferably European rabbits) over the long-term.
Posted by Jorge at 13:48 No comments:

Toxoplasmosis may lead to road kills of Persian leopards

The feral cats as a factor threatening the global biodiversity

The following article is a concise presentation of the domestic cat as a predator, which lives in close proximity to humans and has the ability to self-manage in different environments. The authors refer to a significant real global problem which is the growing number of homeless and feral cats. These animals represent a serious threat to biodiversity in areas where their number is still growing. Numerous studies on this issue show a significant decrease of certain small mammals and birds population size, since they are often the prey target for feral cats. This problem is especially important when endangered species, protected by law, are considered. Cats, which have become independent from human care function well in the environments where they were previously absent. Cats living in the wild, but near human households, pose also health risk for humans and other animal species, as carriers of zoonotic infectious agents. There are various approaches to solve the problem of feral cats, but they are often opposed by the public opinion.