Pires, A. E., Amorim, I. R., Borges, C., Simões, F., Teixeira, T., Quaresma, A., ... & Matos, J. (2017). New insights into the genetic composition and phylogenetic relationship of wolves and dogs in the Iberian Peninsula. Ecology and Evolution.

This study investigates the gene pool of Portuguese autochthonous dog breeds and their wild counterpart, the Iberian wolf subspecies (Canis lupus signatus), using standard molecular markers. A combination of paternal and maternal molecular markers was used to investigate the genetic composition, genetic differentiation and genetic relationship of native Portuguese dogs and the Iberian wolf. A total of 196 unrelated dogs, including breed and village dogs from Portugal, and other dogs from Spain and North Africa, and 56 Iberian wolves (wild and captive) were analyzed for nuclear markers, namely Y chromosome SNPs, Y chromosome STR loci, autosomal STR loci, and a mitochondrial fragment of the control region I. Our data reveal new variants for the molecular markers and confirm significant genetic differentiation between Iberian wolf and native domestic dogs from Portugal. Based on our sampling, no signs of recent introgression between the two subspecies were detected. Y chromosome data do not reveal genetic differentiation among the analyzed dog breeds, suggesting they share the same patrilineal origin. Moreover, the genetic distinctiveness of the Iberian wolf from other wolf populations is further confirmed with the description of new mtDNA variants for this endemism. Our research also discloses new molecular markers for wolf and dog subspecies assignment, which might become particularly relevant in the case of forensic or noninvasive genetic studies. The Iberian wolf represents a relic of the once widespread wolf population in Europe and our study reveals that it is a reservoir of unique genetic diversity of the grey wolf, Canis lupus. These results stress the need for conservation plans that will guarantee the sustainability of this threatened top predator in Iberia.
Posted by Jorge at 08:34 6 comments:

Whereas studies in comparative cognition normally invoke ecology and social organization to account for differences in social behaviour and cognition across species, dog–wolf differences have so far been explained mostly as a result of direct human selection for desirable traits (e.g., tameness, attention to humans, sociability). Yet, as will be reviewed in this paper, dogs and wolves also differ considerably in both their feeding niche and social organization (which together we refer to as ‘social ecology’). We suggest that observed wolf–dog differences especially in their interaction with the environment (e.g., neophobia, persistence, risk taking) and conspecifics (e.g., tolerance, cooperation, communication) need to be considered also in regard to their social ecology. We propose that social ecology alongside human selection should be recognized as a potentially important factor affecting dogs’ behaviour, and suggest a number of potential avenues for future research, which can more directly test the relative importance of these selection forces.

A Dogged problem for Wildlife?

A Dogged problem for Wildlife? 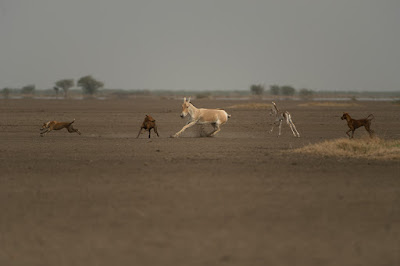 Cat management campaigns have been implemented on several islands worldwide. However, few successful campaigns have occurred on permanently inhabited islands. Cats are known for causing severe impacts on the native insular fauna, posing an important threat to biodiversity. Moreover, this species is also responsible for zoonosis maintenance and transmission. A thorough understanding of cat population structure (e.g., supervised vs. unsupervised) is strongly suggested as a management action on inhabited islands, as it might promote more efficient and effective management of this species. Fernando de Noronha is an archipelago in the tropical Atlantic Ocean. The total cat population on the main island was estimated at 1287 animals, most of them supervised and subsidized around inhabited areas. Free-roaming cats currently threaten the endemic terrestrial fauna of Fernando de Noronha, and the cat density found by the present work is among the highest ever recorded on an island. Using population dynamic simulations, the long-term effects of reproduction control and removal of cats from the archipelago were assessed. Removal of cats was also suggested as a necessary management strategy to achieve negative population growth. In addition, it was more cost-effective than reproduction control. However, applying both removal and sterilization strategies to this population resulted in a higher population decrease than removal alone. For these reasons, a combination of reproductive control and cat eradication should be implemented in Fernando de Noronha.
Posted by Jorge at 12:45 No comments:

Humans and their canine companions share many close bonds. Wolves (Canis lupus) were the first animal domesticated by people, some time between 15,000 and 50,000 years ago.

There are now an estimated 1 billion domestic dogs across their near-global distribution.