Conclusions
The evidence hints that the more eagle-like Old World vultures have a more equal relationship than the New World vultures with scavenging canids. Further study on this difference is important for three reasons. Vultures have declined in many Eurasian and African countries and canids (including feral dogs) have increased their scavenging role. Hence, a vulture population recovery must acknowledge the competitive role of canids. Also, as condor recovery programs are gathering ground in the Americas, the coyotes are possible impediments, possibly to a greater degree than jackals would be to old world vultures. Canids have a strong sense of smell and may precede vultures at hidden carcasses (condors and Old World vultures lack a sense of smell), hence when more visible carcasses are removed for sanitation purposes, conflicts may emerge between vultures and canids over the few remaining food sources. This encourages possibilities for detailed field research, which may increase our knowledge of the ecological relations of vultures and link the somewhat disparate studies of vulture evolution and biology with ecology and conservation possibilities.
Posted by Jorge at 00:00 No comments:

Farmers and environmentalists in northern Tasmania are teaming up to eradicate feral cats blamed for killing more than 20 billion native Australian animals a year, as well as threatening livestock ... continue reading 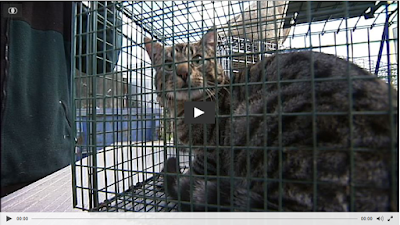 
There is a need to clarify the impacts of feral cats on wildlife populations and thus set clear objectives for their control.

No method of biological control is available for immediate use. Fertility control using a contraceptive vaccine is the option with the most promise. This approach and two other broad strategies (a mortality approach usint lethal disease and environmental manipulation) are discussed in detail.

Although Feline Parvovirus has been used in attempts to control feral cats elsewhere, animal welfare concerns and probable immunity are likely to prevent its use in mainland Australia. No other feline diseases would cause rapid death in a relatively humane manner to a large enough proportion of a cat population to be useful for biological control.

The diseases and ecology (including population dynamics, reproduction and behaviour) of cats, and community attitudes to their control are discussed in depth. Relatively little information was available on feral cats. Most is derived from studies of domestic cats. Research currently underway is described. More information is needed on the ecology and epidemiology of diseases in feral cat populations in order to develop predictive models for specific biological control agents. Serological surveys for viral diseases in feral populations are given nights priority.

A fertility control approach using an immunocontraceptive vaccine probably has a reasonable chance of success in relation to public acceptability if the technical hurdles can be overcome. These include ensuring that the vaccine is cat specific, that it induces sterility without affecting social behaviour and that it's effects last long enough to be worthwhile. No effective chemical sterilants are available.

Results of research programs on immunocontraception of rabbits and foxes should indicate whether it is a feasible option for vertebrate pest control. Non-transmissible agents are more likely to be publicly acceptable because of concerns over the safety or other species and pet cats.

Attributes of successful pest control programs (for cats and other vertebrate pest species) are discussed. Refinement and combined use of conventional control methods will be essential for future cat control whether of not biological control is used.

Would you pay to reduce euthanasia rate in your country?

Siettou, C. (2015). The UK public’s perceptions on the issue of the dog overpopulation problem and people’s willingness to pay (WTP) for a humane stray dog management.

The present study surveyed a UK representative sample of 500 individuals and employed the Choice Experiment (CE) to elicit the UK public’s views on the management of stray dogs and people’s willingness to pay (WTP) to reduce the current euthanasia rate. The results revealed that people have an emotional bonding with companion animals and are willing to pay to reduce the current euthanasia rate. According to the findings the UK public believes that the current stray dog management of euthanizing unhomed dogs is of grave or moderate concern and appears to be keen on the imposition of welfare-improving policies such as dog licensing, compulsory micro-chipping, etc. In addition, the CE investigated people’s willingness to pay (WTP) on a monthly basis to extend the current stray dog seven day statutory period in order to reduce the euthanasia rate. By constructing two payment methods, those of a Voluntary Contribution and of a Mandatory Council Tax Charge the study revealed that people are willing to pay £5.83 per month for small cross/mixed breed dog under the Voluntary Contribution regime and £2.14 per month for a young dog under the Mandatory Council Tax Charge regime.
Posted by Jorge at 11:49 1 comment:

abc.net.au
A new national approach and co-ordinated effort is needed to control feral cats, according to the Federal Government.

Threatened Species Commissioner Gregory Andrews wants feedback on how to deal with the explosion of cats, saying they are a "huge problem" in Australia.

"Australia is home to around 20 million feral cats, according to the latest scientific information. That's not home cats or stray cats, that's feral cats living in the bush," he said.

Thar region is located in west of Aravalli ranges, lies between 22°30’ N to 32°05’N and 68°05’ E to 75°45’E in Rajasthan state of India. It is part of the "The Great Indian Thar Desert”, which is seventh largest desertsof the world. This region, with all climatic vagaries, is endowed with diversities of wild fauna, including free ranging wild ungulates, like Indian gazelle (Gazella bennetti), Blackbuck (Antelope cervicapra) and Nilgai or Bluebull (Boselaphus tragocamelus). Present study comprised of about 2100 km road survey in the region. We surveyed 05 closed areas (19 transect) in Jodhpur and Nagaur districts of Rajasthan. It was found that feral dogs are major cause of the deaths in the blackbuck (about 45%) and the chinkara (35%) population in the study areas. The feral dogs caused as high as 62%mortality in ungulate’s fawn population. Another hazard to ungulate population is found to be over speeding of vehicles on the roads, which passes through ungulates inhabited areas, caused 24% mortality in the chinkara and about 15% in the blackbuck population. There are other numerous causes, which are responsible for mortality and health hazard to wild ungulate population in arid region of Rajasthan. Blackbuck and Chinkara is included in the Schedule-I of Wildlife (Protection) Act, 1972 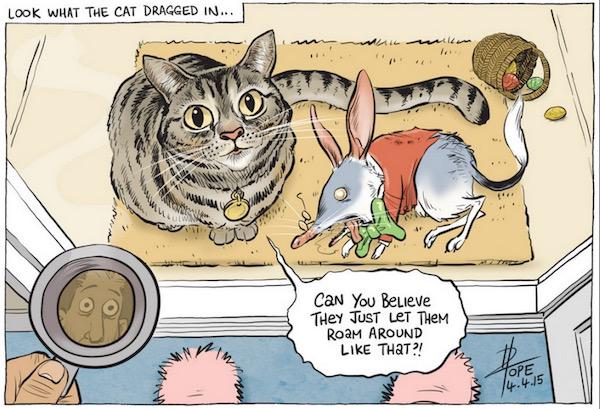 Japan hosts the largest population of the threatened Ryukyu flying fox (Pteropus dasymallus), which, in Taiwan, suffered a drastic decline leading to local extinctions and, in the Philippines, remains only on three small islands. Conservation of the species in Japan is therefore crucial. National and international assessments have been based only on local anthropogenic factors, such as habitat degradation, electrocution on power lines, and accidental entanglements.

Using face-to-face interviews of farmers of the Yaeyama islands (eastern part of the Ryukyu archipelago), we discovered that other significant human-driven causes of decline were overlooked in assessments. Most importantly, we report here for the first time on the illegal killing of this species by farmers because it feeds on crops. The bat has been killed by intense poisoning, beating, and netting. Other cases of illegal infringement of animal welfare principles by the general population were also encountered (i.e. confinement and mistreatment) but could not be quantified. Furthermore, we also determined the historical use of flying fox meat as a food source, which has also never been documented before. Finally, we identified emerging threats that were previously neglected in the assessments of the species’ conservation status, namely predation by feral or semi-feral cats and dogs, whose populations have been booming in recent years. These unexpected factors, especially the ongoing killing of P.d. yayeyamae, call into question the IUCN downlisting (EN- > NT) decided in 2008, when poisoning campaigns were actually culminating, and lead us to recommend the initiation of conservation actions (particularly population monitoring), education campaigns, as well as the provision of technical assistance to farmers in need of it.
Posted by Jorge at 14:23 No comments:

Outdoor domestic cats (Felis catus) threaten the welfare of birds and endanger the integrity of the ecosystems into which domestic cats are introduced in Idaho.
Posted by Jorge at 14:15 No comments: