The introduction of mammal predators to islands often results in rapid declines in the number and range of seabirds. On Ascension Island the introduction of cats in 1815 resulted in extirpation of large seabird colonies from the main island, with relict populations of most species persisting only in cat-inaccessible locations. We describe the eradication of feral cats from this large and populated island. The campaign had to minimize risk to humans and maintain domestic animals in a state that prevented them re-establishing a feral population. Feral cat numbers declined rapidly in response to the strategic deployment of poisoning and live trapping, and cats were eradicated from the island within 2 years. During the project 38% of domestic cats were killed accidentally, which caused public consternation; we make recommendations for reducing such problems in future eradications. Since the completion of the eradication campaign cat predation of adult seabirds has ceased and five seabird species have recolonized the mainland in small but increasing numbers. 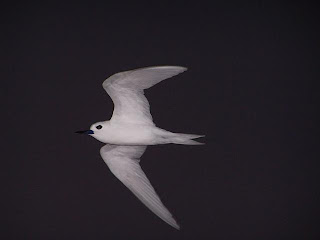 Breeding success of seabirds at Ascension was low compared to that of conspecifics elsewhere, and the roles of food availability, inexperience of parent birds and black rat predation in causing this warrant further investigation. It is likely that the low breeding success will result in the rate of increase in seabird populations being slow.
Posted by Jorge at 09:00