Deworming alone is not enough against Toxocariosis

Methods
A stochastic model was developed to quantify the relative contribution to the environmental contamination with Toxocara eggs of household dogs, household cats, stray cats, and foxes, all older than 6 months in areas with varying urbanization degrees. The model was built upon an existing model developed by Morgan et al. (2013). We used both original and published data on host density, prevalence and intensity of infection, coprophagic behaviour, faeces disposal by owners, and cats’ outdoor access. Scenario analyses were performed to assess the expected reduction in dogs’ egg output according to different deworming regimens and faeces clean-up compliances. Estimates referred to the Netherlands, a country free of stray dogs.

Results
Household dogs accounted for 39 % of the overall egg output of >6-month-old hosts in the Netherlands, followed by stray cats (27 %), household cats (19 %), and foxes (15 %). In urban areas, egg output was dominated by stray cats (81 %). Intervention scenarios revealed that only with a high compliance (90 %) to the four times a year deworming advice, dogs’ contribution would drop from 39 to 28 %. Alternatively, when 50 % of owners would always remove their dogs’ faeces, dogs’ contribution would drop to 20 %.

Conclusion
Among final hosts of Toxocara older than 6 months, dogs are the main contributors to the environmental egg contamination, though cats in total (i.e. both owned and stray) transcend this contribution. A higher than expected compliance to deworming advice is necessary to reduce dogs’ egg output meaningfully. Actions focusing solely on household dogs and cats are unlikely to sufficiently reduce environmental contamination with eggs, as stray cats and foxes are also important contributors.
Posted by Jorge at 20:52 No comments:

A contentious debate over the management of free-roaming cat populations is ongoing. Nevertheless, disparate groups of stakeholders share a common goal of fewer community cats. Unowned cat management typically necessitates a choice between utilization of lethal or nonlethal measures. Research has indicated strong public support for employment of non-lethal methods, like trap-neuter-return (TNR). Collaborative TNR programs are experiencing success in a growing number of communities. The purpose of this exploratory study was to identify new or underutilized public-private collaborative practices, and associated elemental factors, that have the potential to be used as—or incorporated into—templates of best practice for the nonlethal management of unowned cats in Ohio. An additional objective was to uncover impediments to the implementation of collaborative programs. Semi-structured interviews were conducted with stakeholders as part of a qualitative approach. Participants representing ten humane societies/shelters, four county animal control agencies, a TNR-cat rescue group and a municipal government located in various parts of Ohio were interviewed over an eight-week period. A prevailing willingness on the part of stakeholders to collaborate and widespread support for non-lethal methods of unowned cat control were discovered. Moreover, a majority of stakeholders cited access to low-cost spay-neuter surgeries as essential to the initiation of TNR programs; multiple participants described lack of nearby access to such services as an impediment to conducting TNR. In addition, local ordinances preventing TNR were cited as substantial hindrances. Overall, significant potential within Ohio for expansion of collaborative non-lethal management programs for community cats seems to exist. Mitigation of impediments uncovered in this study will likely play an important role in leveraging this opportunity.
Posted by Jorge at 11:45 No comments:

A call for predator profiling in wildlife protection programs

Introduced predators have been implicated in the decline of many fauna populations around the world and are the main factor responsible for the failure of numerous fauna reintroduction programs. As a result, control of introduced predators is a significant management action implemented in wildlife protection programs, particularly in Australia, New Zealand and on islands. Individual predators are seldom targeted in conservation programs, which usually conduct broad-scale, non-specific predator control based on the assumption that the removal of each individual predator is equally important. In contrast, predator management programs initiated by human–wildlife conflict typically use profiling or specific control techniques to target ‘problem’ predators. 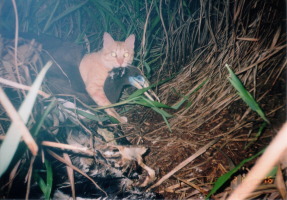 We investigated whether individual domestic cats vary in the magnitude of their predation threat to wildlife by first reviewing published and anecdotal information on incidences where feral cats have had significant impacts on wildlife protection or translocation programs. We concentrated on prey species that were likely to be more challenging to cats based on their size, novelty or behavior. We then used the results from this review to create a profile of cats that were most likely to cause significant problems for challenging prey, and tested this during a translocation of a threatened mammal species. Both the review and translocation suggested that large male cats 3.5 kg or heavier were disproportionally responsible for predation events on challenging prey and possibly implicated in the failure of many protection or reintroduction programs of mammals greater than 1 kg. Some cats within this demographic profile were responsible for multiple prey deaths suggesting that both demography and prior experience may define predators capable of ‘catastrophic predation’ that threatens prey populations.

Current control programs for feral cats and foxes that do not target particular predator profiles may inadvertently avoid controlling individuals most likely to specialize on threatened prey. We call for the application of crime-fighting forensic and aggregate profiling techniques in wildlife protection programs to determine the profile of predators likely to prey on focal wildlife species and to guide the development of control methods that specifically target these individuals.

Threat by feral dogs to fauna and humans in NE India

This article discusses the threat and loss to wildlife, along with the damages in the livelihood of livestock farmers in Spiti Valley, Himachal Pradesh, India due to feral dogs. It is suggested that feral dogs are the most prominent threat to their livestock which are usually attacked by the dogs during the night. Despite the damages, the villagers never harm the animals owing to their Buddhist culture and peaceful nature. The Himalayan fox (Vulpes vulpes montana), Woolly hare (Lepus oiostolus), and Blue sheep (Pseudois nayaur) are the most attacked, harassed and chased by the feral dogs. Population control measures and surgical sterilization are recommended strategies in controlling their growing population.
Posted by Jorge at 11:59 No comments:

One of the key gaps in understanding the impacts of predation by small mammalian predators on prey is how habitat structure affects the hunting success of small predators, such as feral cats. These effects are poorly understood due to the difficulty of observing actual hunting behaviours. We attached collar-mounted video cameras to feral cats living in a tropical savanna environment in northern Australia, and measured variation in hunting success among different microhabitats (open areas, dense grass and complex rocks). From 89 hours of footage, we recorded 101 hunting events, of which 32 were successful. Of these kills, 28% were not eaten. Hunting success was highly dependent on microhabitat structure surrounding prey, increasing from 17% in habitats with dense grass or complex rocks to 70% in open areas. This research shows that habitat structure has a profound influence on the impacts of small predators on their prey. This has broad implications for management of vegetation and disturbance processes (like fire and grazing) in areas where feral cats threaten native fauna. Maintaining complex vegetation cover can reduce predation rates of small prey species from feral cat predation.
Posted by Jorge at 20:02 No comments:

Different perception of stray cat risks in Florida and Hawaii


Perceptions of risk and attitudes toward animals predict tolerance for wildlife and management preferences. Little is currently known about how these relationships vary across different geographic regions and interest groups. In this study, we combined data collected independently in two different states that are recognized centers of the outdoor cat management debate (Florida and Hawaii). We then identified differences in tolerance for outdoor cats and risk perceptions between key interest groups and the public using a consistent methodology to draw conclusions about how public perception of the risks presented by outdoor cats, group membership and state of residence influenced people's tolerance for outdoor cat populations across widely separated geographical, cultural, and political regions. Our results indicate that there were significant State and group differences in tolerance for outdoor cats, perceived cat-related risks, and experiences with outdoor cats. Our findings suggest that public tolerance for cats is susceptible to the influence of local or geographical concerns; but strongly held beliefs, risk perceptions and feelings about cats are more important predictors of stakeholder tolerance.
Posted by Jorge at 13:00 No comments:

The feral cats in the Bonin Islands are the cause ofgreat concern in relation to the conservation of native birds. Among the species found dead during this study, Tristram’s Storm-Petrel is listed as‘Vulnerable’ in the Japanese Red Data Book, so it isespecially urgent to take measures to conserve them. Many other threatened seabirds such as Matsudaira’s Storm-Petrel O. matsudairae and Audubon’s Shearwater P.lherminieri bannermani also breed in the Bonin Islands and they sometimes accidentally land on the ground in bad weather making them vulnerable to cat attacks. Thus, it is necessary to clarify the extent of feral cat predation in the islands and to control the cat population.
Posted by Jorge at 14:55 No comments:

A range of public health and animal welfare problems has been shown to be associated with free-roaming dogs. With a high density of free-roaming dogs and with a major tourism industry, Samoan tourists are likely to be influenced by the presence of the dogs. The tourists are mainly from the Oceanic region; with New Zealand and Australia as the biggest contributors. The aim of this study was to examine the potential impacts of dogs on visitors to Samoa.
A questionnaire was handed out to 281 visitors all over Samoa, collecting opinions and information on visitors’ experiences and behaviour regarding the Samoan dogs. The data were collected and analysed.
Almost all of the respondents in this study had seen free-roaming dogs in Samoa (269/274) and half of these respondents were negatively affected by the dogs’ presence (137/211). A vast majority of respondents thought that dogs required better management in Samoa (222/274). A majority also thought there were too many strays in Samoa (188/277) and that they did not look well fed (180/274) or healthy (194/274). A vast majority of respondents had ever avoided contact with dogs (235/272). About a fourth of the respondents had witnessed inappropriate behaviour against dogs according to their own definition (66/262). More dogs were seen in Apia, the capital of Samoa, where dogs also were more commonly perceived as a problem. Respondents in this study showed a support for humane population management methods such as sterilisation and registration. A majority were supportive of humane euthanasia, but a vast majority were unsupportive of poisoning of strays.
Compared to similar studies in other tourist areas, respondents in this study showed a high concern of dogs. The greater problems with free-roaming dogs in Apia have earlier been shown in other urban areas.
Free-roaming dogs are a problem for the tourism industry in Samoa. The findings of this study, along with previous findings, present the need of improvement of the Samoan dog situation. The problem seems to be more urgent in Apia than in the rest of Samoa.
Posted by Jorge at 11:17 No comments: